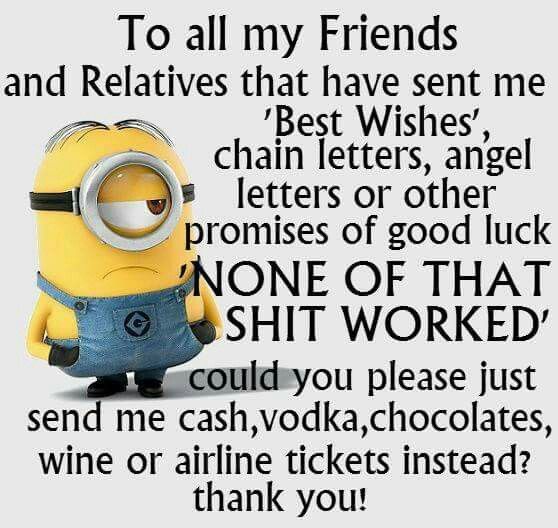 “We’re starting a collective, constructive, and hopefully uplifting exchange.  It’s a one-time thing and we hope you will participate.  We have picked those we think would be willing and make it fun. “

Upon receiving that request from a lovely friend I did what valued friendships require and obeyed- dutifully sending this chain letter off to several other friends whose friendships I also hold in high regard.

But whose friendship should have I been more loyal to? That of the sender or sendee?

“I’m sorry, but can’t do this, so just letting you know,” wrote one recipient. “ Sending it on to other people is my hang up,” she continued, “ you really never know who doesn’t appreciate this type of thing,” she said.

“I totally agree with you,” I wrote back on the harassing novelty of chain letter writing which annoys me to no end. “Apologies for including you in the group. May I say in support of your position that I actually refused to follow explicit instructions and only sent 7 instead of the required 20 letters. But this semi protest in no way excuses my cowardly behavior. Your daring refusal to comply has emboldened me to ignore all such requests in future. Thank You!”

I have always detested forcing friends to join in on the chain mail craze. So I would hit on family first. I cringingly forwarded an interesting chain mail letter to my sister once and received in response a real bollicking from her. “I hate these things!” she said. “They are so threatening.”

An example of which can be found on a Rutgers University website:
“This message has been sent to you for good luck.
You will receive good luck within four
days of receiving this message – Provided you, in turn send it on.
(One) Man received 40,000 Dollars (but) lost it because he broke the
chain.
Whereas in the Philippines, Gene Welch lost his wife 51 days after
receiving the message. He failed to circulate the message.”

No matter how frightening or intriguing  these things seem we must stop perpetuating this practice of preying on the weakest in the herd for our own selfish purposes. That is, to encourage good fortune or to at least thwart bad luck.

“Dear Friends,” I subsequently wrote to the little group of 7,

“I am now absolving you from any responsibility you may have felt to continue the recent chain mail link I sent you following a severe spanking from another friend who steadfastly refuses to impose this practice on anyone she considers a friend. I agree with her and apologize for taking advantage of your loyalty.”

To be kind, I do think most people conduct chain letter campaigns simply because they believe in sharing.  Likening it to ordinary FACEBOOK postings the authors of both are creating a little community and honestly think you might be interested in or educated by what they have to say.

And in some cases it is true. For the majority though, your choice of latte in the morning and a picture documenting it are only interesting to you. But unlike FB which may only request that you ‘Like” something, the chain letter, which may also provide something interesting, actually demands action – the involuntary inclusion of others…. Or else (see tragic examples above)  or, at the very least, the disappointment of the friend who authored the letter.

The only fair choice is to go cold turkey. And make no apologies. Not an easy mission to resist the pressure to comply. Especially when you receive a persuasive spin on chain letters as I did recently. “I never forward these kinds of things, BUT…..this is ….blah, blah, blah,” the message said. Gone is any credibility the writer might have had the minute he or she said NEVER have sent a chain mail letter before but doing so now. I understand the message is meant to imply the adoption of a completely unique set of new standards based on the unprecedented message they wish to impart which has now forced them to deviate from their once fiercely held anti chain letter position. But the email they send as an endorsement of their request for mass participation rarely rises to the level of brilliance they ascribe to it.

It’s one thing to pass on wisdom. It’s quite another to demand cooperation, which, if ignored, could produce dire circumstances. It’s emotional blackmail. I am superstitious enough without the added specter of bad luck for non performance.

I have sought advice on this issue from THE BOSTON GLOBE and its Miss Conduct columnist to whom a woman from Peabody Massachusetts once wrote:

“Some friends and relatives constantly forward religious chain e-mails or every joke they come across on the Web. While I realize the intention is good, I am irritated by the assumption that everyone welcomes these e-mails or that I have all the time in the world to read through the endless communications. How do I get the chain letters and jokes to stop without being offensive?”

One thought on “CHAIN LETTER LUNACY”