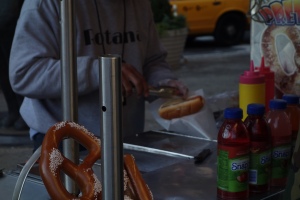 Many months into 2014 I have finally initiated my New Year’s resolution to STOP KIDDING MYSELF. As I lusted after a hot dog on the 9th hole at Mid-Ocean Golf Club, I practiced newfound restraint and rejected the bun the dog was nestled in. That might seem uneventful to you, but I am a girl who loves, loves, loves food and has always enjoyed a brown and white diet. That is, meat surrounded by white stuff. Bread, pasta, potatoes, rice, onion rings. The bigger the carbo load the better. Not an ideal diet for someone recently diagnosed with Type 2 diabetes.  I bring this up as November is National Diabetes Awareness Month.

Although in denial about my condition for one year, it had become clear that eating the same way I had always done would never result in an acceptable blood sugar level or even a dropped pound. Both of which are vital to maintaining good health for those who suffer from sugar problems. It is fate then that I learned of my medical issue while living on Bermuda because there are a lot of other people with exactly the same condition, who may also be living in the same delusional state.

The Bermuda Diabetes Association has a stunning wake up call regarding the growing diabetic problem in Bermuda. Its website states “diabetes now affects 371 million people worldwide… there have been 4 four deaths from diabetes while you were reading this.” A sobering statistic to say the least. “The centers for disease control predicts one in three people will develop diabetes in their lifetimes,” says Sara McKittrick who is the education director for the BDA. And despite the gruesome stories about untreated diabetes resulting in limb amputations to coronaries, she continues to see younger and younger Bermudians developing the disease. “It’s an epidemic,” says McKittrick because “no one will say you’re fat. They tip toe around (the subject) here.”  She adds that “there is a direct correlation between the rise in childhood diabetes and childhood obesity.” It is such a sensitive subject parents and medical professionals shy away from addressing it.

Lifestyle changes are hard. That’s why most folks stay the same. I have been off carbs (except chardonnay, of course) for a week now. I have lost 3 pounds. Perhaps as a challenge to my fortitude my husband asked me to make this fantastic Irish Soda Bread. I made two loaves. I have abstained. Not happily though. To repeat. I love food.  So much so that I actually distrust people who don’t. They seem to lack sensual appreciation. How can you not enjoy a lovely culinary experience?

Nothing satisfies like a meal of french fries, cheeseburgers and Snickers Bars. It’s an indulgently fast fix. On the other hand, eating healthily seems dull and time consuming. Imagine trying to dash off to work but first having to peel the veggies, scramble the eggs and un-lid the yogurt.

The very busy chairman of an international  insurance company  gave me some interesting food for thought after I defended my resistance to nutritious eating.  “It takes so much time to eat healthily,” I moaned. He reminded me, “I work and you don’t. And if I can find time to be responsible about what I eat so can you.”

The subtle admonishment stung. But it also hit home.

Self help guru Anthony Robbins makes a brilliant point in one of his books about success.  He interviewed dozens of CEO’s from top Fortune 500 companies. Despite the fact that all of those high achieving men and women were uniquely different, they all shared a common characteristic: They could make decisions. By that I mean, if they decided to, let’s say, lose weight, then every subsequent decision supported their initial promise. So, no fattening foods, lots of exercise, no excuses and no kidding themselves…ever.