Fay was as unwelcome as any tropical storm intent on dropping by uninvited. But what made her arrival so unique was that no one was really expecting her.

Bermuda’s inhabitants know how to prepare for a storm. But when it is supposed to just slip by virtually unnoticed with only a stiff 35 mile an hour wind you go to sleep confident that your porch furniture will remain on your porch when you wake up. But by morning one neighbor’s balcony railing, outdoor lounge chairs, table, barbecue grill and two toilets (they were renovating)  were nowhere to be found. Fay had taken a direct hit on the island. It also packed 125 mile an hour gusts.  Some say 150.  Saturday night everyone blissfully went to sleep with no thought of Fay. But like a hurt neglected child she roared onto the island demanding we take notice.  At 5:30 Sunday morning she proceeded to dispense her fury and although her tantrum only lasted the morning even the most seasoned seafarers on the island were suffering because they had not properly prepared.

A stunning sight was this sloop spit out of the sea by Fay
and unceremoniously deposited on the back lawn of a local realtor. 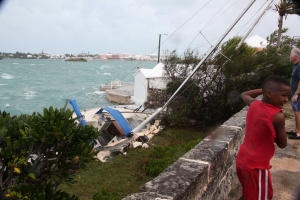 Note to self. Buy fancy cars not luxury boats and stay on dry land. One man lost a 20 foot umbrella attached to a one thousand pound pole.  3 roofs blew off in our community alone.

And still not a sign of any of those missing items anywhere….yet.  It’s a mystery. Just like Malaysian Airways Flight 370. Interestingly  Sir Tim Clark, the head of Emirates Airline said this week that, basically a plane and its debris doesn’t just disappear into thin air or deep water. “My own view is that probably control was taken of that airplane.”

He added: “There hasn’t been one overwater incident in the history of civil aviation – apart from Amelia Earhart in 1939 – that has not been at least 5 or 10 per cent trackable. But MH370 has simply disappeared. For me, that raises a degree of suspicion. I’m totally dissatisfied with what has been coming out of all this.”

So are we. Although much less serious, we still have a pattern of unexplained disappearances.  Nothing has been found. Not one toilet. You don’t just walk off with a toilet now do you? Wonderfully though, what does emerge whenever the island has a crisis is that everyone rallies.

One man jumped into action to help a neighbor rescue his boat which had broken free from its mooring and wedged against their dock. It is called “Smooch” if that explains its movement pattern toward the closest stationary object. With wind gusts surpassing 125 miles an hour every avocado hanging from any tree on the island was shaken loose and then delivered by their owners to friends and family who will all have a mountain of guacamole dip all weekend long suitable for hurricane parties. Good thing too as we are bound to lose power again and preparing meals is always a challenge in those circumstances.

Listening to increasingly dire weather reports it is clear that in an unprecedented move the weather gods have seen fit to test our good nature and stoic fortitude again by sending Bermuda yet another more powerful storm tomorrow. It’s a weather two-fer.  Hurricane Gonzalo  is supposed to be highly destructive. Those who could have fled the island. Any flight that was available is now completely booked. All the hotel rooms on the island are chock full.  But we are ready for this storm. Forewarned is forearmed, right? SImply battening down the hatches and riding Gonzalo out is the “A” plan. The  “B” plan involves friends with generators. Good Bye Fay. Hello Gonzalo…

Latest news according to the Bermuda Chamber of Commerce…”The forecast is for tropical force winds for 26 hours beginning at 1:00 a.m. Friday morning.  Hurricane force winds are predicted for 6 to 8 hours. We expect 35 foot seas with a storm surge of 10 feet. The Hurricane is expected to hit at high tide.”