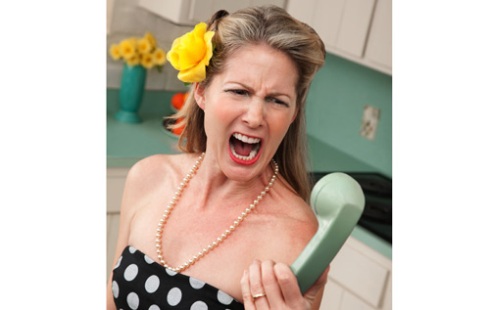 Case in point: I discovered a man with a van who advertised bespoke car cleaning services.

He would actually travel to your home and 90-minutes later your car was clean and no longer an embarrassment to the neighbourhood.

The epitome of big city convenience on a small island.

I emailed him. I got an email back instructing me to call his cell phone instead.

Lesson number one: just take the appointment via email — everyone is doing it.

As instructed, though, I called and left a message on the man’s cell phone. Within a few days I received a call back.

Lesson number two: call clients back within one business day. It shows interest and results in quick money.

I made an appointment but then I had to cancel it. No word from the man.

Lesson number three: chase business. Call clients back and ask them to reschedule.

Still in need of service, I then made several more phone calls and finally another date was settled upon: Monday at 9am, which, predictably perhaps, came and went without any appearance by my car man.

At 9:16 I called his cell number, identified myself and asked, “Where are you?”

“My van broke down,” he answered.

“When were you going to call me?” I asked.

“I was dealing with my truck,” was the terse reply.

Lesson number four: you can’t just not show up.

Everybody understands accidents and alien abductions. But nobody accepts impoliteness or poor business practices.

Lesson number five: be reliable or potential clients will clean their own cars and then where will your business be?

I needed a cleaning service for our home. A friend referred her company. I emailed the owner.

She adhered to lessons one through five perfectly. She emailed back within a day, booked the appointment, appeared as promised, did a marvelous job and was delightfully pleasant.

I took a cab the other day. My driver was handsome, well-dressed, and articulate.

“Hello Madame, how are you today?” he inquired as he opened the door and helped me inside the cab. He was so charming I felt like I was on a date.

I told him how professional and polite he was. It seemed effortless.

I think he was well brought up. Or maybe he had just made a deliberate decision to live his life as a gentleman.

To him, service was not a dirty word. “Yes,” was the response to all that was asked, as opposed to “er, I don’t think we can do that” or “I’ll have to see” or the knee-jerk first response you hear all around the world from the unambitious, which is basically any version of “just not going to happen”.

I have just received a call back from my car man. “I can come now if you still want me,” he says.

“Yes,” I bellow into the phone, thinking ‘better late than never’, and instantly feeling relieved that my worst thoughts about him may not now hold water.

Still, as I greet him I have to ask, “Hey, what’s up with not calling me when you knew you were  late?”

“Um, I lost your number,” he replied.

My new-found confidence in this arrangement suddenly started to plummet, so I decided I’d better confirm the price of this service to avoid any more disappointments or surprises.

He showed me his card.

Lesson number six: you can not change the goal posts in the middle of the game.

The price is the price.

Business is simply — the bargain many of us strike each day. One person respectfully requests a service and another person politely provides one.

Money is exchanged and if both parties are satisfied with the result then the process is repeated. Or not.