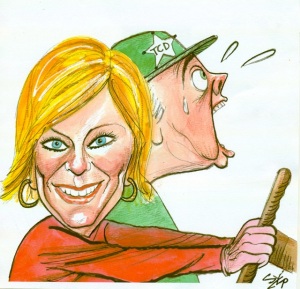 There is not an expat alive who lands on this island and doesn’t yearn to get behind the wheel of a car and onto the rest of her life.  But first, there is the Transportation Control Department to contend with.  I am a brave woman, but the prospect of taking a driving test, both written and practical, filled me with a fear I had not known since the last time I had to take a test. That was in college, which without revealing the exact date, was quite a long time ago.

“How hard can it be?” off islanders would say.  And I started to agree.  I mean I had briefly reviewed the Traffic Code Handbook, hadn’t I?  But who knew that when someone cut you off the correct reaction was to “a.) write down their license plate number?”  Honestly, I am usually too busy swearing at the guy to frantically fumble for a pen.  So I choose “b.) don’t retaliate.” which I thought was a very grown up response to bad road behavior.  TCD didn’t and I failed the test.

So, I started to study. I mean I memorized that book.  With my heart beating as fast as a hummingbird’s I took my place at the TCD console. I knew beyond a shadow of a doubt the answers to virtually all the questions, including the one about why you stay at least one car’s length away from the vehicle in front of you. And, NO it is not to avoid toads as the test manual taunts.

I finished in record time and yes, victory was mine. I was joyful. I was grateful too as I happened to glance at the poor chap sitting next to me who was clearly struggling.  I heard a clerk remark that this was his fourth try. I was so relieved not to be him.  And hopeful I would never meet him on the road. I mean, if he was that reckless in a chair what would he be like behind the wheel?

But the worst was still to come. As I confidently strode up to the counter to schedule my practical driving test I was informed that the next available date was in three months.  What?  There goes the golf season, I thought.  Then I found Dolores.  Dolores, The Dynamic Driving Instructor who, for a small fee gave me lessons and arranged my driving test within hours.

As exam day once again approached, understandable anxiety turned into full-blown terror. I asked others if they had felt similarly and the answer was always the same.  “By God, YES!”  We all know this is one of the fundamental rights of passage for anyone who chooses to make this beautiful aquatic oasis their home.  We all could have just continued riding buses and ferries of course, but sooner or later you must bite the bullet and become independently mobile.

I arrived bright and early at TCD and met my official tester. Meeting is really too strong a word.  As this was not a social occasion, this professional was all business.  My anxiety grew. He shook my hand like a staff sergeant and displayed not one ounce of humor as he directed me to the car.  Doom loomed large.

I got behind the wheel and listened to his instructions. “Back up in a straight line,” he commanded.  I carefully slipped off the emergency brake, checked my mirrors and placed my chariot in reverse.  Then, just to make sure I was not treading too closely to the yellow line, which was the object of this exercise, I opened my door and snuck a little peek.  Suddenly, he barked, “What are you doing.”  I responded “You’re not going to flunk me are you?!”  He didn’t even bother to answer.

Eleven seconds.  That’s all it took for me to feel the sting of defeat once again.

Crestfallen, I called my husband to tell him about what had to be the fastest failure on record. He, of course, had passed his test the first time. He attempted to soothe my bruised ego by trying to convince me that as an American I was naturally unfamiliar with left hand drive. He said it should surprise no one that I would find the  “European” driving style a bit challenging.  I didn’t have the heart to tell him that I had only been backing up, which is the same direction no matter what country you are in.

Dolores was horrified, but got me right back in line for another appointment. The next time I went for my driving test I was partnered with an instructor who was determined to finally get me on the road.  The first 11 seconds passed without incident this time.

The instructor barely spoke to me when we finished so I wasn’t sure I’d actually passed, but I had! I wanted to kiss him, but hugged Dolores instead and she wished me well.

The terror was gone and in its place came, giddy relief.  I was completely road ready.

I am a more careful driver now thanks to TCD, even though I still yearn to peek at those yellow lines every time I back up!